Understanding the Main Causes of Depression

Do you know anyone suffering from depression? It is hard to understand their suffering until and unless you yourself have that condition. 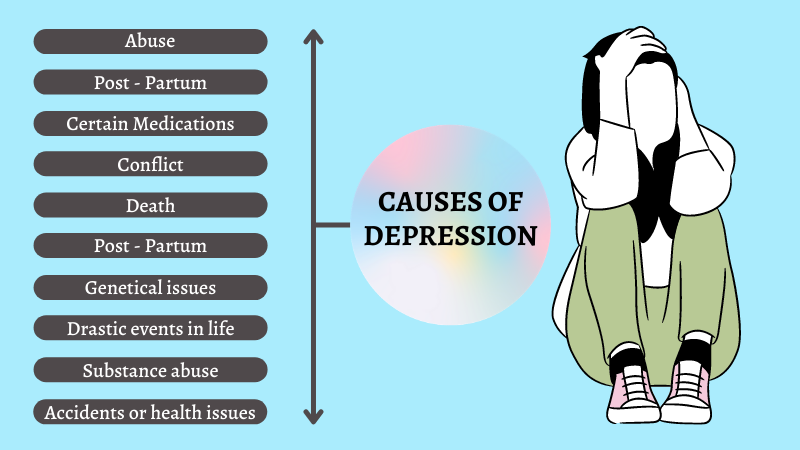 Once super energetic Rajiv suddenly found himself cut off from the crowd. Nobody knew why this was happening to him. You never know when that condition slowly creeps into one’s life and turns it upside down. Till you come to know what is happening, things are already out of your hands. So, it is very essential to acknowledge this particular condition than start with the treatment right away.

Low mood that lingers day and night and the person suffering from depression simply cuts himself off from the rest of the bunch. There are many symptoms that are associated with the depression like having episodes of apathy or sadness, negative personality, signs of weakness, loss of interest in life altogether and so many others. These symptoms can last for two consecutive weeks or more and are so severe that they can disrupt the daily routine completely.

With so much modernisation and unhealthy lifestyle, has made depression a common occurrence and a big public health issue that is treatable. There have been many programs launched to spread awareness regarding this condition. Sometimes depression takes a wrong turn and can lead a person to commit suicide. The lack of pleasurable thoughts and grave feeling of worthlessness can make it very hard for the person in question to get out of it. Some of the physical symptoms to look out for in a depressed are:

Rajiv did not understand initially what was happening to him. His body used to ache continuously, and he lost all interest in his day to day activities. Even after visiting numerous doctors he couldn’t get a satisfying result. It was then, that somebody suggested him to meet the best psychiatrist in Delhi. At first, he was reluctant, because of the stigma attached with the psychiatric treatment. It took him some time to get over the taboo and give this therapy a chance. As depressed person feels every small health problem to be a chronic pain, it is difficult to pinpoint the actual cause of the issue.

It is all related to the chemicals in the brain that play a major role in influencing pain and mood. If you treat it on time, you may get over this condition quickly. All you need to do is have a strong will and find the root cause of your depressed conditions. There are many triggers that makes your depression return to you in full magnitude.

Biology behind the state of depression?

There have been many studies related to depression that has kept scientists and researchers awake day and night. Researchers have studied the changes in brain caused by the clinical depression and they have found out that the state of depression largely affects the hippocampus, where the memories are stored. This memory cabinet shrinks in people with a history of depression. Smaller the size of hippocampus, the lesser will the count of serotonin receptors. This chemical in the brain is an essential neurotransmitter that helps you feel emotions mostly the good ones.

It is hard to say why the hippocampus shrinks to a smaller size in people fighting depression but one main reason behind this could be cortisol. Cortisol is a stress hormone that gets secreted in huge quantity when someone is in depressed state. This has a shrinking or toxic effect on the development of the storage house or the hippocampus. Now, this is all just a theory and very little has been proven.

One thing that most researchers agree on is that depression is a highly complicated illness that has numerous contributing factors. One thing is for sure that giving anti-depressants can have a neurotropic effect on people helping the brain cells to establish stronger bonds. This is only possible if the causes of the depression in a person can be diagnosed in time. Only then will it be possible for the doctor to prescribe effective treatment methods to the patients.

Also Read: How to Know You Need to See a Psychiatrist

Causes of the depression

As we know that depression is a highly complicated disease, it may not be easy to understand the root cause of this state in a person. It took Rajiv’s doctor two sessions to understand what was causing this problem in him as it can occur due to variety of reasons.

Drastic life changes, death of a loved one, or any other reasons could trigger bouts of depression in a person. Lets’ check out some of the causes of depression.

Whether it is physical, mental, or even sexual abuse, people having such a past are more susceptible to having clinical depression. Emotional abuse makes you more vulnerable to the state of depression in later stages of life. It’s like a supressed emotion that rears its head when you are going through a tough phase

This is a major cause of depression in new mothers. Most mothers after childbirth go through this state of depression. It is firstly due to the physical changes and drastic drop in hormones like progesterone and estrogen. As the thyroid gland starts secreting less of hormones that leads to emotional issues, depression, and other problems. Many mothers don’t know how to deal with the whole scenario and new responsibilities and end up feeling depressed.

There are effective treatments available in psychiatry and they have been helping many moms get their lives back on track.

You won’t believe that simple medication for acne like Isotretinoin can cause depression. Just like this, there are numerous medications that can have depressive effect on your mood. Some of them are diazepam, alprazolam, lorazepam, temazepam, and benzodiazepines. These are usually used to treat insomnia and anxiety but also give you depression. Other than these corticosteroids, antiviral- interferon alpha can increase the risks of depression.

This is a common reason for depression. Having a conflict with the near and dear ones can make you vulnerable towards depression. A break up or fight in a relationship is also one of the top causes of severe depression in most people.

Death is one thing that most people can’t accept. It is hard for people to get their life together after someone close to them leaves for heavenly abode. Even if it is natural but it could become very severe is some of the people. Loss of anyone close to you can trigger some serious hidden trauma and that could lead to serious episode of depression.

Some of us may have inherited this complex state from our ancestors. That is in our genes. A family history of depression can come down to you as well. Let’s understand the genetics of depression.

It is mostly like a psychiatric disorder, a complex ball of different genes contributing to bring out small effects on the surface. Scientists believe that 40% of people suffering from depression can be traced back through genetic links and rest 60% is due to environmental and other factors. Basically, chromosome 3p25-26 is said to be the recurring culprit is family genetic depression.

Any major changes, whether it be good or bad can lead to depression. Getting married, graduation, starting a new career or moving to a new place can trigger depression in a person. Some of the negative events such as fear of losing job, retiring, getting divorce can also set you in a phase of depression. It is never a simple or normal response to any drastic events in the life.

It has been recorded that more than 30% of people having substance abuse issues also suffer from clinical depression. The alcohol and drugs can make you happy and relaxed for a little while but makes you vulnerable to having serious bouts of depression. They aggravate the situation many folds in later stages of life.

It has happened too many of us who have met with an accident or are seriously ill. This leads to depression as they start thinking that this state is a dead end. Bed-ridden state can make you depressed. Any other medical condition that doesn’t allow you too much of activities starts making you feel worthless. This is why, most patients have to undergo counselling session to avoid getting depressed.

This entry was posted in Psychiatry. Bookmark the permalink.