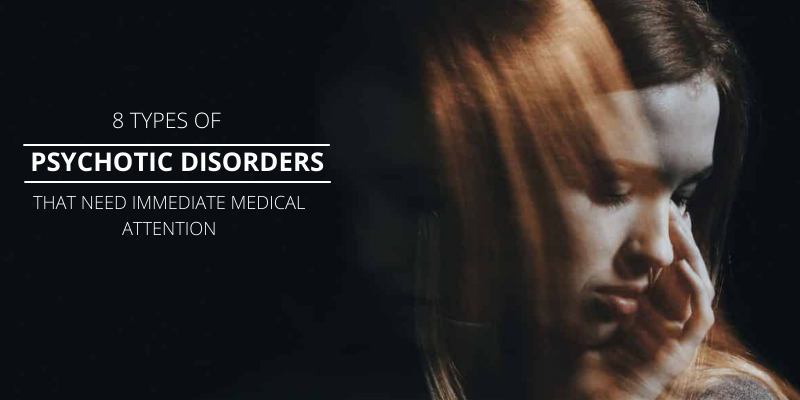 Almost 3 out of 100 people are said to experience psychosis, a stepping stone towards psychotic disorders. Psychosis leads to impairment of lifestyle caused by hallucinations, delusions, and confusion. Psychotic disorder is a wide spectrum of disorders that may or may not go through the process of psychosis.

According to the best psychiatrist in Rohini, it is normal for people to confuse certain medical issues with disorders. Sometimes people may ignore a serious psychotic disorder lurking under a common headache or worries. To clear your doubts it is best to reach out to a good psychiatrist who can help you understand a particular condition, and help you get out of it.

For proper diagnosis, the best psychiatrist in Delhi go for three tests:

Here, is a list of a few psychotic disorders that will need the immediate attention of a psychiatrist. You can check for the symptoms and their types to understand these disorders in detail.

A specific group of disorders that affects the development of the central nervous system is referred to as Neuro-developmental disorders. This could include developmental brain dysfunction that could impair learning, motor skills, non-verbal and verbal communications. These disorders can affect infants and kids before they start school.

ADHD is one common disorder of this group. Some other diseases in this group are autism, cerebral palsy, intellectual disability, and hearing and vision impairment.

The diseases in this group can be diagnosed by assessing the behavior and characteristic symptoms. This can be further confirmed by genetic testing as well.

Schizophrenia Spectrum and Other Psychotic Disorders

To diagnose it,doctors take psychiatric and medical history into consideration. It may include physical examination, MRI scans, and blood tests to distinguish the symptoms from drug use or physical illness.

Intense and extreme emotional condition is the best way to describe bipolar disorders. It is mainly divided into three main conditions:

In this state, people go through mood episodes that are categorized as depressive, hypomanic, or manic. The episodes experience periods of excessive activity, energy, and excitement.

The most common cause of this group of the disorder is the chemical imbalance in the brain. Neurotransmitters, which include chemicals like serotonin, noradrenaline, and dopamine, if increases or decreases creates an imbalance. This can lead to bipolar disorders. They are also considered to be a genetic disease.

It is a type of mental health disorder that causes loss of interest in regular activities and persistently depressed moods. This causes impairment in daily life and can be a result of a psychological, biological, and social source of sadness. These factors bring drastic changes in brain functions that results in a changed activity of the neural circuits inside the brain.

Are you facing excessive worry or fear? Then it is best to consult a psychiatrist right away. These symptoms and more such as difficulty in concentrating or breathing, staying still can be pointing towards anxiety disorders. One in every 7 Indians suffers from anxiety disorders and its common symptoms are fear, panic, and uneasiness.

This is associated with different diseases such as thyroid problems, respiratory disorders, diabetes, heart issues, drug misuse, etc. So, it is very important to diagnose it on time.

There are two main categories in this group of psychiatric disorders and they are:

Earlier these disorders were considered to be anxiety disorders, but now after extensive research doctors have come to distinguish between them. Among them, PTDS is a commonly occurring disorder in men and women, which can occur at any age.

Another one is adjustment disorder, which is not that severe and most common of them all.

Group of mental disorders, that are associated with a lack of continuity between thoughts come under dissociative disorders. People, who have this disorder often start experiencing disconnection between the surroundings, identity, actions, thoughts, and memories.

This disorder disrupts a person’s sense of self and is said to experience dissociative identity disorder. They have a problem with everyday functioning and lead an unhealthy and involuntary life. The three types of dissociative disorders are:

There are successful treatments available one of which is psychotherapy. Many people overcome the symptoms of this disorder and improve their ability to function properly in life. Another treatment involves cognitive behavioral therapy.

Also known as somatoform or somatization disorder, the somatic symptom has incapacitating and distressing physical issues without any medical cause. They come in various forms:

Previously it was known as hypochondriasis or factitious disorder, in which people without any medical issues think they are sick. It depends upon the extent to which the person is experiencing the symptom through behaviors, feelings, and thoughts.

The psychotic disorder is like an umbrella with a wide range of disorders classified under it. Some can be overcome by better motivation and self-assessment, but others need the support and assistance of a good psychiatrist.

This entry was posted in Psychiatry. Bookmark the permalink.